The America of Tomorrow 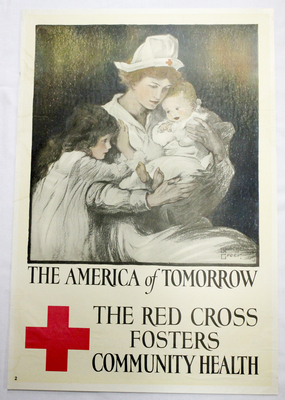 “The America of Tomorrow” was one of many posters issued during World War I to encourage support of the war. This poster was commissioned by the Red Cross from Blanche Geer in 1918. Geer was an American artist and illustrator. Before the war, the Red Cross was a small and insignificant organization based in the United States. During the war, the organization saved money and provided help to the warring nations in Europe. Once the U.S. entered the war, the Red Cross exploded with volunteers and funding from the government. WWI made the Red Cross into a global organization that was capable of helping people around the world. According to the American Red Cross, the poster’s depiction of a nurse holding an infant with a child standing beside her correlates with the text on the poster reiterating the idea that the Red Cross “fosters community health.” This poster was created and reproduced as a photomechanical print at the time of its distribution.