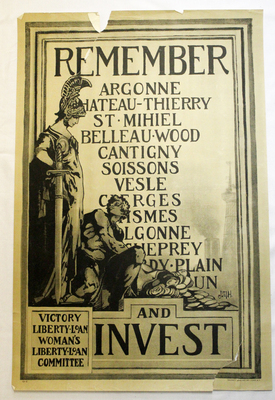 “Remember and Invest” was one of many posters issued during World War I to encourage support of the war. This poster promoted the buying of bonds to help fund the war effort. Due to a law passed by Congress, the government was permitted to petition people to buy bonds. Cumulatively, liberty bonds helped raise more than $17 billion. Other effects of liberty bonds were that they helped civilians to support the war and participate in the effort. Bonds also helped Americans save rather than spend which helped control inflation. Liberty loans were bonds that the government sold so they could keep up with the expenses of war. These were sold back to the government after the war.

This piece features great battles involving U.S. soldiers during World War I. It also features a kneeling man presenting a sack of large coins to a helmeted female figure representing Columbia bearing a sword. According to the Smithsonian Institution, Columbia was the personification of the United States and also symbolized the “goddess of liberty.” "Columbia" originated from a feminized version of Christopher Columbus’ last name. Columbia was historically used as a symbol for American ideals during the American Revolution and the War of 1812. This poster used these symbols of American ideals of liberty and the tangible reminder of the troops sacrifices in France to motivate American citizens to buy liberty bonds. The poster was created by James Monroe Hewlett in 1919. According to the National Academy Museum, Hewlett was an American Beaux Arts architect, scenic designer, and muralist. He is best known for the creation of the mural of the heavens on the ceiling of Grand Central Station in New York City. This poster was most likely created and reproduced as a lithograph at the time of its distribution.