We Clear the Way For Your Fighting Dollars 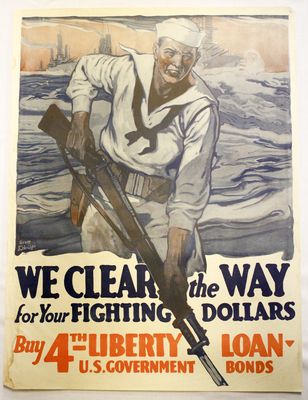 “We Clear the Way For Your Fighting Dollars” was one of many posters issued by the U.S. government during World War I to encourage support of the war. This poster features a Navy seaman coming ashore carrying a rifle,while war ships float in the horizon. The caption, “We Clear the Way for your Fighting Dollars, Buy 4th Liberty Loan U.S. Government Bonds,” meant more than the words itself. Liberty Loans were bonds that the Government sold so they could keep up with the expenses of war. These were sold back to the Government after the war. The words “clear the way” became not only a slogan but a daily utterance. This poster was meant to appeal to working class Americans to support the war financially by buying bonds. The 4th Liberty Loan Campaign was the most successful out of all bond campaigns (“The U.S. During World War I”, 2019). This poster was created by American artist Scott Ethridge in 1918. The poster was most likely created and reproduced as a photomechanical print at the time of it’s distribution.