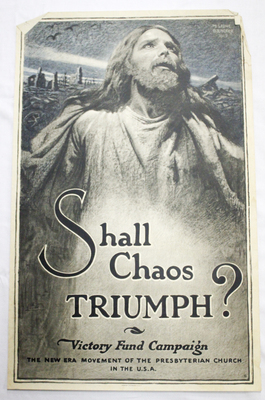 “Shall Chaos Triumph” was one of many posters issued during World War I to encourage support of the war.This poster features an image of Jesus Christ looking up into a darkened sky in despair while a city lies in ruins behind him. The poster was created to encourage people to give to the Victory Fund campaign, a war bond campaign that would help to finance the Allied victory. The text "Shall Chaos Triumph?" encouraged people to give as much as possible to advance the military campaign. Many propaganda posters utilized images of women, children, and Christian symbolism to encourage Americans to help fund the war. The caption at the bottom of the poster states, “The New Era Movement of the Presbyterian Church in the U.S.A.”. The endorsement of the Presbyterian Church was to instill a sense of duty in Christian Americans to help fund the war. The Presbyterian Church commissioned this poster from American artist M. Leone Bracker in 1919. Bracker was an illustrator of primarily advertisements and magazine covers. The poster was created and reproduced as a lithographic print at the time of it’s distribution.