Have You a Red Cross 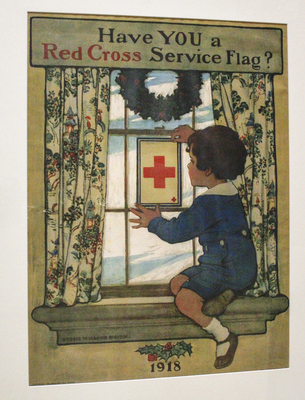 “Have You a Red Cross” was one of many posters issued during World War I to encourage support of the war. This poster was commissioned by the Red Cross in 1918. The main purpose of this poster was to market the Red Cross flag and encourage people to support the Red Cross and its war efforts. The American Red Cross played a vital role in the United States war efforts in their extensive medical relief effort overseas for combat casualties, gathering necessary supplies, providing jobs and opportunities for women to support the war, and providing essential aid to the families of military personnel. The American Red Cross commissioned many war posters during both WWI and WWII to encourage public support. They commonly used images of women and children in their propaganda posters as women played a vital role in the Red Cross. The illustrator of this poster, Jessie Willcox Smith, was a notable American female illustrator of the time and contributed to many publications, especially books and magazines in the late 19th to early 20th centuries. Smith had trained as an elementary teacher but was not able to meet the physical demands of working with children and turned to illustrating. According to the Norman Rockwell Museum, Smith was a member of the Red Rose Girls who were considered the “most influential female artists of American domestic life at the turn of the twentieth century.” Her pioneering art often featured children, as is shown in this poster, and used professional child models. This poster was created and reproduced as a lithographic print at the time of its distribution.