Every Girl Pulling for Victory 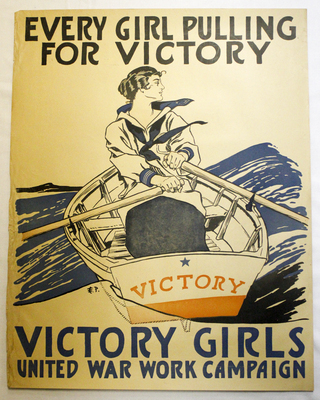 “Every Girl Pulling for Victory” was one of many posters issued by the United States government during World War I to encourage support of the war. This World War I patriotic poster was designed by Edward Penfield in 1918. Penfield was a famous illustrator and considered by many to be the father of the American Poster. He was known for posters which stood out and could be enjoyed from a great distance. During his time, reproduction methods were still limited. He used simple shapes and a limited color palette to make the most of what was available. Pictured in this poster is a Liberty Girl dressed as a sailor pulling a rowboat through strong seas. The girl has strong, masculine features. During wartime, women were often found filling in the jobs the men left behind. They began working in industrial work such as factories and shipyards. In the poster, the boat is entitled the Victory and the caption promotes the Victory Girls United War Work Campaign. This poster asked for donations for the United War Work Campaign for $17,500,000. The United War Work Campaign was created the day WWI ended. It was formed by a coalition of America’s biggest organizations: YMCA, YWCA, The American Library Association, Jewish Welfare Board, Knights of Columbus, the Salvation Army, and War Camp Community Service. These groups combined were called the “Seven Sisters.” They raised money to help war-torn Europe and the troops that stayed in Europe well past 1919. The groups worked to put aside their differences to help the soldiers in Europe. Penfield’s World War I propaganda poster and others like it were used to encourage donations of money and charitable service (“Every Girl Pulling for Victory, 2019). This poster was created and reproduced as a lithographic print at the time of its distribution.