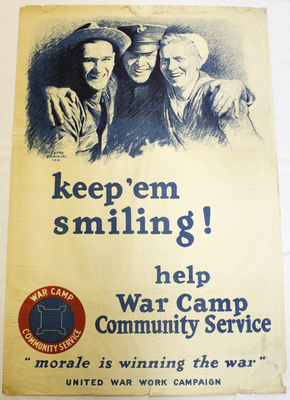 “Keep Em’ Smiling” was one of many posters issued during World War I to encourage support of the war. This poster asked for donations for the United War Work Campaign for $17,500,000. The United War Work Campaign was created the day WWI ended. It was formed by a coalition of America’s biggest organizations: YMCA, YWCA, The American Library Association, Jewish Welfare Board, Knights of Columbus, the Salvation Army, and War Camp Community Service. These groups combined were called the “Seven Sisters.” They raised money to help war-torn Europe and the troops that stayed in Europe well past 1919. The groups worked to put aside their differences to help the soldiers in Europe (“For the Boys Over there,” 2019). The poster features three men close together smiling in their different uniforms. The caption says, “Keep em’ smiling! Help war camp community service.” It is also interesting to note at the bottom of the poster it says, “morale is winning the war” signed by the United War Work Campaign. Many propaganda posters focused on morale as a means of encouraging Americans to contribute to the smiling faces of their troops. Civilian morale, also called Esprit de Corps, and military morale were important because they encouraged unity. This poster was created by American artist M. Leone Bracker in 1919. Bracker was an illustrator of primarily advertisements and magazine covers. This poster was created and reproduced as a lithographic print at the time of its distribution.