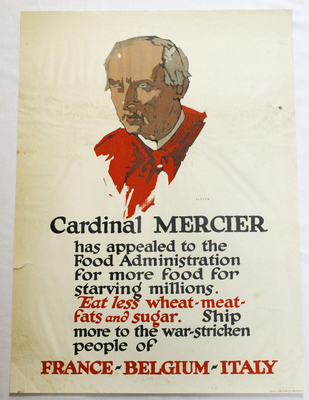 “Cardinal Mercier” was one of many posters issued during World War I to encourage support of the war. Cardinal Mercier became a household name during World War I. Born in Braine l’Alleud, Belgium in 1851, Mercier was ordained a priest in his mid-20s. In 1906, he was named Archbishop of Mechelen and Primate of Belgium. The following year he became a cardinal. When Germany invaded Belgium in August 1914, Cardinal Mercier was attending a papal election in Rome. He promptly returned to Belgium and began resisting the German occupation. Most famously, Cardinal Mercier published a series of pastoral letters, beginning with “Patriotism and Endurance,” that condemned the atrocities committed by the German armies and encouraged Belgian unity (Gorse, 2018). The writings ultimately led to his house arrest, but Cardinal Mercier didn’t stop there. He went on to protest the forced deportations of Belgian men to Germany and spoke out against Germany’s attempts to exploit tensions over Flemish nationalism and divide Belgium in two. News spread of Cardinal Mercier’s efforts in Belgium, which carried over into Allied propaganda. The cardinal was considered both a hero and a symbol of Belgium’s struggles. Mercier embodied Belgian resistance to the occupying power. This popular poster uses Mercier’s popularity and symbolism and states, “Cardinal Mercier has appealed to the Food Administration for more food for starving millions.” The poster also advertises food conversation, a major part of American food propaganda during World War I. The caption says, “Eat less wheat- meat-fats and sugar. Ship more to the war-stricken people of France-Belgium-Italy.” This poster was created by American artist George Illion in 1918. This poster was created and reproduced as a lithographic print at the time of its distribution.