The Greatest Mother of the World 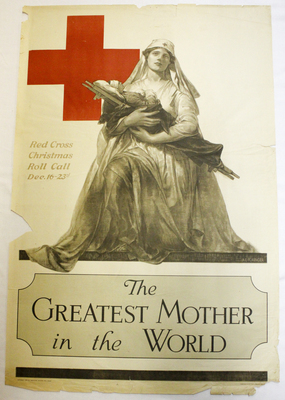 “The Greatest Mother in the World” was one of many posters issued during World War I to encourage support of the war. This poster was commissioned by the Red Cross from Alonzo Earl Foringer, or A. E. Foringer, in 1918. Foringer, an American painter, was a member of an important political family in Pennsylvania. Before the war, the Red Cross was a small and insignificant organization based in the U.S.. During the war, they saved money and provided help to the warring nations in Europe. Once the U.S. entered the war, the Red Cross was inundated with volunteers and funding from the government. WWI made the Red Cross into a global organization that was capable of helping people around the world. This poster shows a young woman in a Red Cross uniform. The woman has soft features and her eyes look upward as if praying as she holds a wounded soldier, on a stretcher, in her arms. This was to encourage the image the Red Cross wanted to present as being the greatest mother in the world. This popular poster was used many times throughout the war. This poster specifically also advertised the Red Cross Christmas Roll Call on Dec. 16-23, 1918. The armistice between the Allies and Germany was signed in November 1918. This armistice effectively ended the war; however, the Red Cross recognized that there would be a tremendous amount of work to do after the influenza pandemic had killed an estimated 21 million people. The decision to conduct a major membership drive for the Red Cross was made in November 1918. The goal of the Universal Membership Week was to enroll every American as a member. This goal was not achieved (American Library Association Archives, 2019). This poster was created and reproduced as a lithographic print at the time of its distribution.