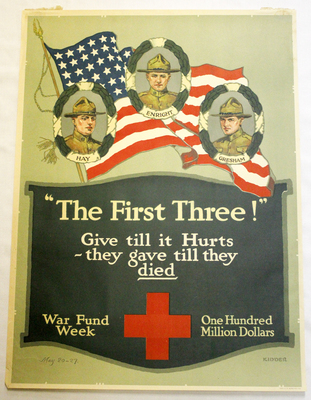 “The First Three ” was one of many posters issued during World War I to encourage support of the war. This poster was commissioned from American artist Benjamin Kidder in 1918. This propaganda poster features an American flag flying behind three portrait medallions of three young men in uniform. These men, Merle Hay, Thomas Enright, and James Gresham were the first three Americans to die on the battlefields of Europe (Embattled Emblems: Posters and Flags of the First World War, 2017). This poster was featured in a newspaper headline about the November 1917 American deaths. The caption, “Give till it hurts - they gave till they died,” advertises the Red Cross’s War Week Fund. This poster helped the Red Cross raise one million dollars in a single week (Embattled Emblems: Posters and Flags of the First World War, 2017). Before the war the Red Cross was a small and insignificant organization based in the U.S.. During the war, they saved money and provided help to the warring nations in Europe. Once the U.S. entered the war, the Red Cross exploded with volunteers and funding from the government. WWI made the Red Cross into a global organization that was capable of helping people around the world. The poster was created and reproduced as a lithographic print at the time of it’s distribution.