Help Him Win by Saving and Serving--Buy War Savings Stamps 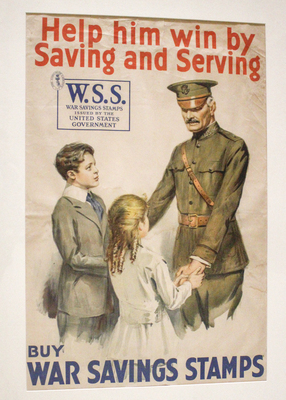 “Help Him Win by Saving and Serving--Buy War Savings Stamps” was one of many posters issued by the U.S. government during World War I to encourage people to buy War Savings Stamps (W.S.S.). W.S.S. could be purchased for 25 cents, and, when enough were accumulated, they could be traded in for war bonds. While the artist of the poster is unknown, the poster was published in 1918 and most likely commissioned by the U.S. government. The poster shows an American soldier holding the hands of a two American children. The ways that children could support the war effort were minimal. Children did not receive much attention from the government as children were not able to fight and had no source of income. This poster promoted a way that children could help their country and give them a role in the war. The admiration of the children as they look up at the smiling soldier told young girls and boys that by spending their money on these stamps, they were serving their country which was emphasized by the text “Help him win by Saving and Serving.” This poster was created and reproduced as a lithographic print at the time of its distribution.