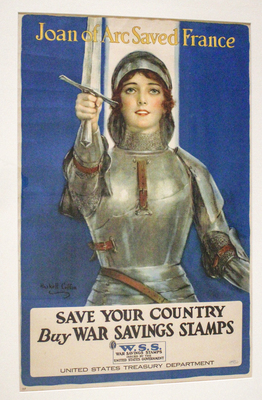 “Joan of Arc Saved France-- Women of America Save Your Country Buy War Savings Stamps” was one of many posters issued by the U.S. government during World War I to encourage people to buy War Savings Stamps (W.S.S.). W.S.S. could be purchased for 25 cents, and, when enough were accumulated, they could be traded in for war bonds. This poster shows Joan of Arc holding a sword against a blue and white background. During WWI, women had an increased role in the war effort which led to many posters targeting women being issued by the U.S. government. The poster encouraged women to buy W.S.S. by suggesting that this would help to save the country and bring their husbands and sons home. The poster was commissioned by the U.S. Treasury Department from William Haskell Coffin in 1918. Coffin was a popular American painter and commercial artist in the 1920s. He specialized in paintings of women and often had his work featured on the covers of leading magazines. This poster was created and reproduced as a lithographic print at the time of its distribution.

Joan of Arc, a well known French war heroine, caught people's attention and remind them of the conflict happening in Europe. She is depicted in shining armor, raising up a sword with a soft face and a slim figure. According to a paper by Laura M. Rother, in posters of women, soft features were to help civilian women relate to the picture. These features also made the poster stand out among the sea of other posters depicting soldiers and the enemy. The blue and white of the background, along with the red of Joan of Arc’s hair and lips were a symbol of U.S. patriotism. This poster connected women to the war effort while also connecting American patriotism to the war in Europe.