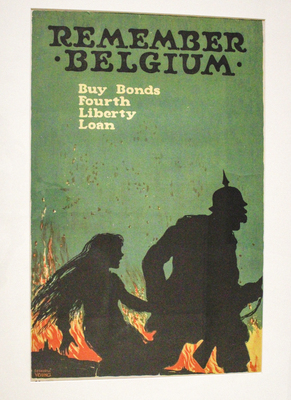 “Remember Belgium-- Buy Bonds Fourth Liberty Loans” was one of many posters issued by the U.S. government during World War I to encourage support of the war. This poster specifically ignited a multitude of emotions and outrage towards the Germans. The statement “Remember Belgium” was first used in England but was soon also used by the Americans. According to the Imperial War Museum, “In 'Remember Belgium', the artist uses the alleged atrocities committed by Germans in 1914 to generate sympathy for the Belgians and thereby encourage Americans to invest in war savings.” The Allied countries painted Belgium as a small innocent country that had been occupied and horribly treated by Germany. The U.S. and its allies wanted to paint this picture of the Germans in order to receive more support for the war through bonds or Liberty Loans. Liberty Loans were bonds that the government sold so they could keep up with the expenses of war. These bonds were sold back to the government after the war.

This poster was commissioned by the U.S. government from Ellsworth Young in 1918. Young was an American magazine and book illustrator. While there is not much known about Young, it is understood that he specialized in landscape portraits. "Remember Belgium" depicts a German soldier carrying away a women while a city burns in the background. This imagery was used to represent the alleged burning of many villages and the raping of many women by the hands of the Germans. These posters were used to paint the Germans as savages. The German soldier carrying away a woman tells the viewer that one way they can stop the savages is by buying War Bonds. This poster was created and reproduced as a lithographic print at the time of its distribution.