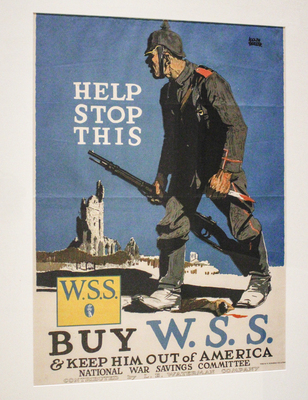 “Help Stop This -- Buy W.S.S. & keep him out of America” was one of many posters issued by the U.S. government during World War I to encourage people to buy War Savings Stamps (W.S.S). W.S.S could be purchased for 25 cents, and, when enough were accumulated, they could be traded in for war bonds. This poster was commissioned by the U.S. government from Adolph Treidler in 1917. Treidler was an American artist and illustrator known best for his advertisement work and his propaganda posters. The poster depicts a German soldier carrying a rifle and holding a bloody knife, while wandering amongst the ruins of a city. The soldier is depicted as having an ape-like figure, with hunched shoulders and a confused animalistic look. This imagery made the German soldiers seem like nothing more than beasts. The destroyed city in the background represented Europe and the destruction by the German “savages.” The poster is pleading with civilians to buy War Savings Stamps so they can stop the war and prevent the Germans from destroying America. The poster was created and reproduced as a lithographic print at the time of its distribution.