Over the top for you - Buy U.S. gov't bonds, Third Liberty Loan 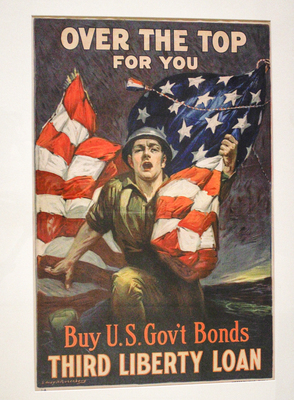 “Over the top for you - Buy U.S. gov't bonds, Third Liberty Loan” was one of many posters issued by the U.S. government during World War I to encourage support of the war. This poster was commissioned by the U.S. government from Sidney Riesenberg in 1918. Riesenberg was an American artist and illustrator from New York who was known especially for his oil paintings. The poster depicts a soldier charging up a hill while an American Flag is draped across his back. The soldiers’ mouth is agape, and he has a look of fear in his eyes. This imagery was meant to target a civilian’s thoughts of their loved ones fighting in Europe. The poster encouraged the viewer to purchase a Liberty Loan to support the soldiers and end the war. Liberty Loans were bonds that the government sold so they could keep up with the expenses of war. These were sold back to the government after the war. This poster was created and reproduced as a lithographic print at the time of its distribution.