E-E-E-YAH-YIP Go Over with the U.S. Marines 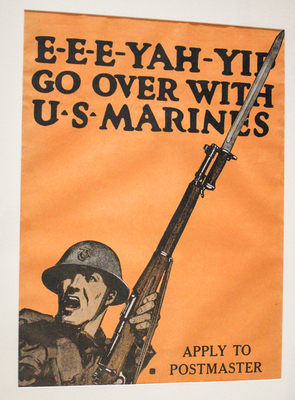 “E-E-E-YAH-YIP Go Over with the U.S. Marines” was a typical WWI recruiting poster distributed by the U.S. government to rally men to sign up and fight in Europe. The poster depicts a Marine holding up his rifle and yelling E-E-E-YAH-YIP, the battle cry of the Marines. The U.S. Marines at the time were not as prominent as they are in the 21st Century, and therefore were the smallest branch of the U.S. military. This meant that the Marines had to recruit heavily and most of their forces were new and unknowledgeable. They became recognized in 1918, during the battle of Belleau Woods, where they earned the nickname “Teufelhunden” or devil dogs. This poster was created in 1917 by Charles Buckles Falls, or C.B. Falls, a popular American illustrator and author. Falls painted many recruitment posters for all branches of the military. According to the University of Southern Maine, Falls is quoted as once saying, “A poster should be to the eye as a shout is to the ear”. This meant that the poster should grab the attention of the targeted audience through bright colors and by using short and catchy phrases. Most men would sign up through the postmaster, which is mentioned at the bottom of the poster. The poster was created and reproduced as a lithographic print at the time of it’s distribution.