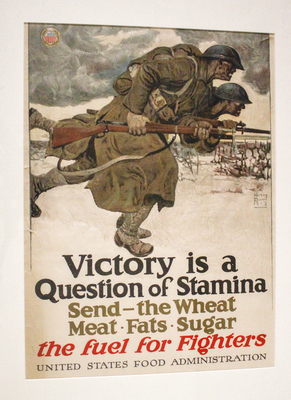 “Victory is a Question of Stamina--Send - the Wheat, meat, Fats, Sugar--The Fuel for Fighters United States Food Administration” was one of many posters issued by the U.S. government during World War I to encourage support of the war. This poster specifically encouraged support of the United States Food Administration. During WWI, President Woodrow Wilson assigned Herbert Hoover, the Chairman of Commision of Relief in Belgium, to come back to the U.S. and head the U.S. Food Administration. The food administration was founded to help provide food for the soldiers fighting overseas, while also providing food for war torn countries. The administration food policy was based on voluntary means not rationing, unlike their European counterparts. This created a need to promote self-rationing and donating food, thus posters were created. In this poster, two American soldiers rush across a snowy field, while the poster asks people to send “fuel” for the soldiers in Europe. This was effective as the common civilian raised personal gardens and donated canned goods to help the troops fighting in Europe. The poster was created in 1917 by American painter and teacher, Harvey Dunn. Dunn made major contributions to the development of illustration in his lifetime and is a known member of the Brandywine school, a group of influential artists in the early 1900s. This poster was created and reproduced as a lithographic print at the time of its distribution.