For Every Fighter a Woman Worker. Care For Her Through the YWCA 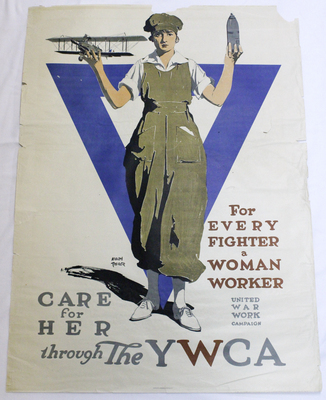 “For Every Fighter a Woman Worker. Care For Her Through the YWCA” was a poster published in WWI to recruit women to the Young Women's Christian Organization (YWCA). During WWI, many jobs opened up for women due to men being sent to war. Women were needed in factories to help provide for the war effort. The poster shows a woman standing tall while holding a miniature fighter and an artillery shell. The feminine stance and figure is saying that femininity will not be compromised due to working in factories. This is telling women that the work they are doing is for the good of the country and that they will be honored because of it. In reality, the conditions that many women workers faced were terrible. Working with big machinery, explosives, and poisonous gases was very dangerous and many women did not receive the proper equipment or training to deal with these circumstances. The fatalities and other casualties caused by these conditions were not awarded with medals and were hardly recognized until many years later. This poster was commissioned by the YWCA to Adolph Treidler in 1918. Treidler was an American artist and illustrator best known for his advertisement work and his propaganda posters. This poster was created and reproduced as a lithographic print at the time of its distribution.