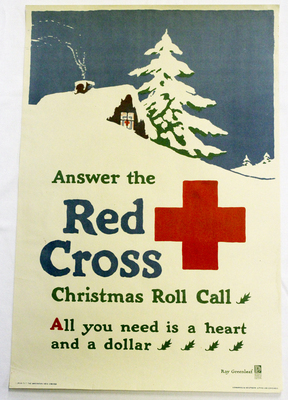 “Answer The Red Cross Christmas Roll Call” was one of many posters issued during World War I to encourage support of the war. This poster was commissioned by the Red Cross to artist Ray Greenleaf in 1918. The poster asked donors to give money to help them provide relief for the troops in Europe. Before the war the Red Cross was a small and insignificant organization based in the U.S. During the war, the organization saved money and provided aid to the warring nations in Europe. Once the U.S. entered the war, the Red Cross was inundated with volunteers and funding from the government. WWI made the Red Cross into a global organization that was capable of helping people around the world. The poster shows a cozy cabin covered with snow which was associated with the Christmas spirit. This was done to encourage giving and to make citizens aware that, while they are enjoying Christmas in the comforts of their homes, young American soldiers were freezing in Europe. This type of encouragement was successful, and the Red Cross received many donations. This poster was created and reproduced as an offset lithographic print at the time of its distribution.