Every American Boy Should Enroll in the Victory Boys 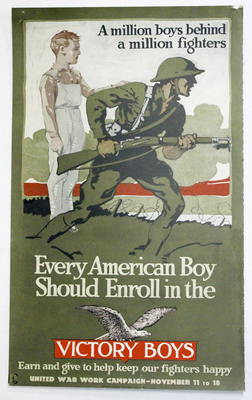 “Every American Boy Should Enroll in the Victory Boys” was one of many posters issued during World War I to encourage support of the war. This poster was aimed at young boys looking for ways to help their country during World War I. In 1918, the seven groups of the United War Work Campaign, which included the YMCA, Jewish Welfare Board, and Salvation Army, formed a sub-division aimed at children. This sub-division included the Victory Boys, the Victory Girls, and the Victory Juniors. This was the first time in U.S. history that children were part of an organization that helped the war effort. The Victory Boys and Girls were between the age 12 and 20 and received a pin when they turned in a pledge card. Each boy and girl was encouraged to earn $5 for the United War Work Campaign, and many exceeded the pledge amounts. Even though these groups were formed in 1918 to support the war, they continued to earn funds for relief and recovery after the war had finished. This poster shows a young boy behind a soldier preparing to charge. This imagery promoted the idea to young boys and parents that even children had a part to play in the war; and when they joined the Victory boys, they were with the men fighting on the battlefield. While it is known that the poster was published by Rogers & Company, the specific artist behind this poster is unknown. The specific date of production is also unknown; however, it is likely that it was produced in 1917 or 1918. The poster was created and reproduced as a halftone photomechanical print at the time of its distribution.