For Home and Country 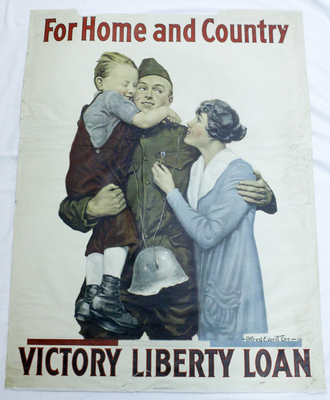 “For Home and Country” was one of many posters issued by the United States government during World War I to encourage support of the war. During WWI, the U.S. government needed money to pay for tanks, ammunition, airplanes, and ships to fight the war. The government found funding through civilians by means of war bonds or Liberty Loans. This was a very effective way of receiving large amounts of money quickly. The poster encouraged the viewer to purchase a Liberty Loan to support the soldiers and end the war. These were sold back to the government after the war. The poster depicts a soldier with his wife and son. The son is smiling and happy to see his father, while the wife admires the medal on the soldier's uniform. This imagery was used to convince civilians to buy war bonds so their families could come back together. The poster was also telling people that by buying bonds they were supporting the men overseas. This poster was commissioned by the U.S. government from Alfred Everitt Orr, an American artist known for his work in California. This poster was created and reproduced as a lithographic print at the time of its distribution.