Invest in the Victory Liberty Loan 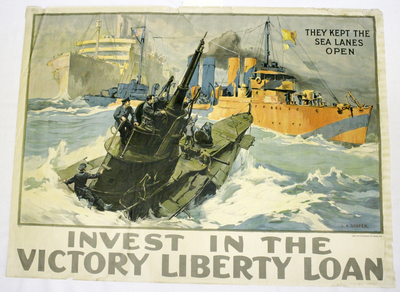 “Invest in the Victory Liberty Loan” was one of the final posters issued during World War I to encourage support of the war. During WWI, the United States government needed money to pay for tanks, ammunition, airplanes, and ships to fight the war. The government found funding through civilians in the form of war bonds or Liberty Loans. These loans or bonds were a very effective way of getting large amounts of money quickly. The poster encouraged the viewer to purchase a Liberty Loan to support the soldiers and end the war. These loans were sold back to the government after the war. The poster depicts a American Destroyer defending a passenger liner from a German U-boat. This imagery depicts the pride of the U.S. Navy and their battle to keep the sea lanes open for supplies to reach Europe. During WWI, submarines were introduced on a mass scale and German U-boats were the terror of the seas. Eventually, the American fleet grew and became strong enough to counter the German U-boats due to the money earned from posters like this one. This poster was created by Leon Alaric Shafer in 1918. Shafer, an American painter, etcher and illustrator, was best known for his maritime and military subjects. This poster was created and reproduced as a colored print at the time of its distribution.