The Greatest Mother in the World 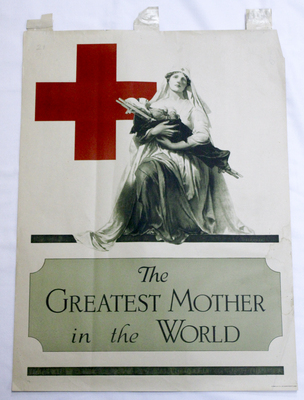 “The Greatest Mother in the World” was one of many posters issued during World War I to encourage support of the war. This poster was commissioned by the Red Cross from Alonzo Earl Foringer, or A. E. Foringer, in 1918. Foringer, an American painter, was a member of an important political family in Pennsylvania. Before the war, the Red Cross was a small and insignificant organization based in the U.S. During the war, they saved money and provided help to the warring nations in Europe. Once the U.S. entered the war, the Red Cross was inundated with volunteers and funding from the government. WWI made the Red Cross into a global organization that was capable of helping people around the world. This poster shows a young woman in a Red Cross uniform. The woman has soft features and her eyes look upward as if she is praying as she holds a wounded soldier, on a stretcher, in her arms. This was to promote the image the Red Cross wanted to project for itself as being the greatest mother in the world. This poster was created and reproduced as a lithographic print at the time of its distribution.