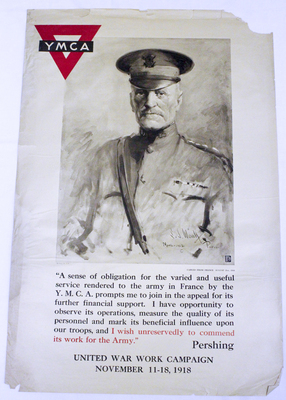 “YMCA United War Work Campaign, November 11-18, 1918” was a poster commissioned by the YMCA at the end of the war to honor the efforts of the YMCA workers during the war. The poster shows a picture of U.S. General John J. Pershing and includes a quote from one of his speeches:

“A sense of obligation for the varied and useful service rendered to the Army in France by the Y.M.C.A. prompts me to join in the appeal for its further financial support. I have the opportunity to observe its operations, measure the quality of its personnel and mark its beneficial influence upon our troops, and I wish unreservedly to commend its work for the Army.”

According to researcher Michelle Ule, during WW1, the YMCA provided 90% of the general welfare to American troops numbering over 4 million with the help of 26,000 paid workers and 35,000 volunteers. They provided entertainment for the troops and managed the U.S. mail, helping soldiers write letters to loved ones. They also provided morale boosters such as religious activities and even roller skating rinks. They also provided coffee, tea, donuts, and cigarettes at mobile canteens, where soldiers from the front lines could come to relax and recover. The artist and publisher of the poster are unknown, but it is known to have been distributed in 1918. This poster was created and reproduced as a halftone photo-mechanical print at the time of its distribution.