The Next to Go, Fight Tuberculosis 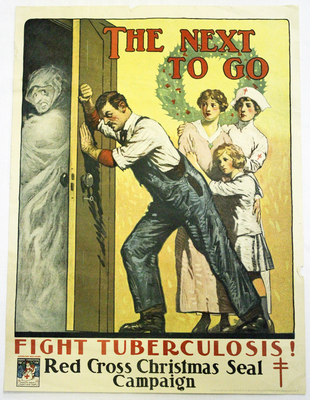 “The Next to Go, Fight Tuberculosis” was a poster commissioned by the Red Cross to encourage support for the Red Cross Christmas Seal Campaign. Tuberculosis was the dominant chronic illness of the first half of the 20th Century. With no effective drug treatment at the time, everyone exposed to it gained the primary infection which usually healed spontaneously. Over a period of months or years the primary could develop into the second infection which lead to the gradual destruction of one's lungs. Someone with the second infection would be isolated from everyone and usually went through grueling surgeries and treatments that did not work most of the time. During the end of WWI, the army was not prepared for the high count of tuberculosis patients. This lead to many men being discharged in order to stop the spread of tuberculosis. The Red Cross used posters about fighting tuberculosis to make more people aware of the dangers of the disease. Long after the war ended, in the 1950’s, a drug treatment, streptomycin and isoniazid, was invented and the cases of tuberculosis went down dramatically. While the specific artist of this poster is unknown, it is known that it was published by Sackett & Wilhelms Corp. in 1919. The poster was created and reproduced as a colored print at the time of it’s distribution.