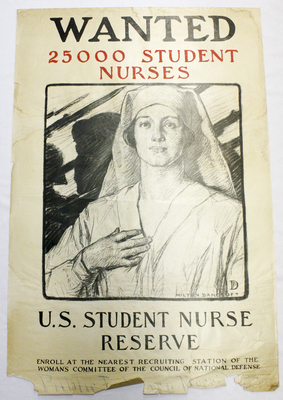 “Wanted 25,000 Student Nurses--U.S. Student Nurse Reserve” was one of many posters issued during World War I to encourage support of the war. This poster was published by the United States government to recruit nurses for the war. Nurses helped immensely during WWI. While many of them had minimal training, they could provide comfort and some first aid to the troops. Working throughout the day and night under harsh conditions usually only a mile or two from the front line, while getting little sleep and dealing with cold and rainy weather was a challenge for the nurses, but many did not mind. They believed it was their duty in the war, and they would do anything to bring “their boys” home. Nurses during WWI proved to the world that women could make a huge impact on the battlefield, handle the harsh conditions, and save soldiers’ lives. Many nurses received medals for their efforts in the war, paving the way for the future involvement of women in war. Posters, such as this one, were used to recruit nurses and student nurses to be trained by the army and prepared to be transported to Europe. This poster was created by artist Milton Herbert Bancroft in 1917. Bancroft was an American artist best known for his impressionistic paintings and a set of drawings documenting American forces in France in WWI. This poster was created and reproduced as a lithographic print at the time of its distribution.