Give or We Perish 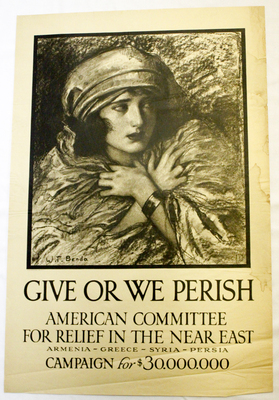 “Give or We Perish” was one of many posters issued during World War I to encourage support of the war. This poster was commissioned by the Near East Relief (NER), a charity organization formed to support the victims of the Armenian genocide. In order to help stop the total annihilation of the Armenian population, America sent humanitarians to the Middle East and set up an emergency fund. The American Committee for Armenian and Syrian Relief was formed in 1915 and was headed by James L. Barton and Cleveland H. Dodge. This organization managed to raise millions for the relief of the Armenians, and, through missionaries in Constantinople, the funds were distributed to the Armenians. When America entered the war, this life line to the Armenian people was cut, but relief was started again after the end of the war. Between 1915 and 1930, when the operations were not functioning, the NER raised about $117,000,000 in assistance along with food, clothing, and other essentials. The NER is credited with sheltering about 150,000 Armenian orphans, and according to American historian Howard M. Sacher, “quite literally kept an entire nation alive.” The poster depicts a woman who seems terrified about something. The poster also states all the countries that the NER aided: Armenia, Greece, Syria, and Persia (modern day Iran). The poster was created by artist Wladyslaw Theodore Benda in 1917. Benda, a Polish painter, illustrator, and designer who relocated to New York early in his life, is best known for his work in costume and mask design. This poster was created and reproduced as a lithographic print at the time of its distribution.