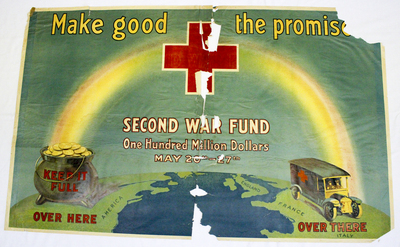 “Make Good the Promise” was one of many posters issued during World War I to encourage support of the war. This poster was commissioned by the Red Cross from an unknown artist in 1918. Before the war, the Red Cross was a small and insignificant organization based in the United States. During the war, this organization gathered donations and provided aid to the warring nations in Europe. Once the U.S. entered the war, the Red Cross was inundated with volunteers and funding from the government. WWI made the Red Cross into a global organization that was capable of helping people around the world. The Second War Fund was asking for donations in order to reach $100,000,000 between May 20-27, 1918. The campaign was a huge success, and the fund gathered $166,439,291 from 47 million American donors. This poster depicts a map of America, the Atlantic, and Europe connected by a rainbow, with a pot of gold on one end in America, with the statement “Keep it Full,” and an ambulance on the other end in Europe, with the statement “Over There.” This design proved a persuasive tactic in gaining massive donations for the war and relief effort. This poster was created and reproduced as a photomechanical print at the time of its distribution.