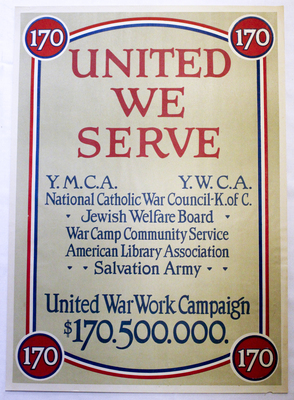 “United We Serve” was one of many posters issued during World War I to encourage support of the war. This poster asked for $17,500,000 in donations for the United War Work Campaign. The United War Work Campaign was created by a coalition of America’s biggest organizations the day WWI ended, This coalition included: YMCA, YWCA, The American Library Association, Jewish Welfare Board, Knights of Columbus, the Salvation Army, and War Camp Community Service. These groups combined were called the “Seven Sisters.” They raised money to aid war-torn Europe and the troops that stayed in Europe well past 1919. The groups worked to put aside their differences to help the soldiers in Europe. The poster design is simple, stating only the names of all the organizations involved and how much they are asking for in monetary donations. While the artist and publisher are unknown, the poster is known to have been circulated in 1918. This poster was created and reproduced as a lithographic print at the time of its distribution.