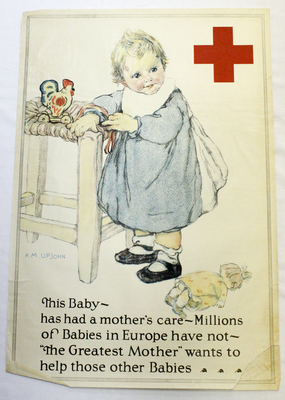 “This Baby has had a mother's care--Millions of Babies in Europe have not--’The Greatest Mother’ wants to help those other Babies” was one of many posters issued during World War I to encourage support of the war. This poster was commissioned by the Red Cross in 1918. The American artist Anna Milo Upjohn was hired as a staff artist by the Red Cross organization. Before the war, the Red Cross was a small and insignificant organization based in the U.S. During the war, the organization saved money and provided help to the warring nations in Europe. Once the U.S. entered the war, the Red Cross was inundated with volunteers and funding from the government. WWI made the Red Cross into a global organization that was capable of helping people around the world. The image of a toddler in this poster was designed to evoke in viewers feelings of sympathy for the needy infants and mothers in Europe. These sympathetic sentiments encouraged viewer support for the Red Cross through donations and volunteer efforts. This poster was created and reproduced as a lithographic print at the time of its distribution.